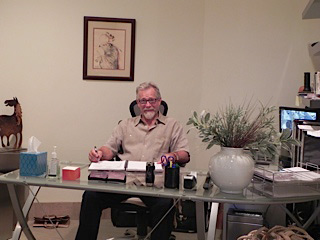 In 1995, Steve Tietsort opened The Imagined Life Studio with Diana Castle where he has been directing and producing as well as teaching and coaching. In addition to running The Imagined Life studio spaces, he’s worked as an adjunct professor at USC Drama School in the BFA program directing on their main stage from 1997 – 2002.

Steve has enjoyed working with actors for the past 20 years in one capacity or another. He began acting before moving into directing and now coaching and teaching is his passion. He loves working with talent of all ages and experience.

Steve has performed leading roles on stage with Ed Harris in SCAR. Other stage credits include: Fool for Love, Equus, Crimes of the Heart, A Lesson from Aloes, Streamers and David in the DramaLogue Award winning production of Strange Snow. Steve has also created leading roles in Refugees of Eden, Eleven Stories/I-20, Screen Door Melody and Bottle Babies.

In '97 he directed Diana Castle in the west coast premiere of Easter collaborating with writer Will Scheffer (Big Love). The show garnered Dramalogue Awards for Best Play, Best Director and Best Actress. Other directing projects include: Sunday on The Rocks by Theresa Rebeck, Maiden's Prayer by Nicky Silver, Lie of the Mind by Sam Shepard and many others.

As a producer, He has worked with top talents Lily Tomlin and Julie Harris who were featured in our Solo Festival and with two time Tony winning writer William Luce (The Belle of Amherst) as well as Paula Cizmar (American Family) and Murray Mednick (Padua Hills Playwrights).

Copyright © 2020. The Imagined Life. All Right Reserved. Web Design and Development by Promerix